Korean superstar Kang Daniel has confirmed the Asia route of his World Tour following the concerts in Seoul and Japan. Konnect Entertainment has announced the seven cities tour including Manila, Bangkok, Kuala Lumpur, Taipei, Singapore, Hong Kong and Macau. “KANG DANIEL TOUR IN ASIA will start in MANILA on October 22, 2022 at the New Frontier Theater. Tickets will go on-sale on October 1, 10AM via TicketNet.com.ph and all TicketNet outlets nationwide. Presented by Konnect Entertainment, Genie Music and promoted by Wilbros Live.

Last month, Kang Daniel was well received by performing his first concert in Seoul three years after his solo debut. As local and international fans attended, they witness the amazing performance of the superstar after the long wait, which was delayed by the pandemic. On October 15 and 16, the heat will continue in Osaka and Yokohama, Japan. Due to the demand, the first solo concert will be expanded to a world tour. Kang Daniel recently made a strong impression on the overwhelming stage at the Kelly Clarkson Show, starting with the US Grammy’s “Press Play”. It also signed a contract with Warner Music Japan to confirm its entry into the country, signaling the start of its global activities. Kang Daniel’s management Konnect Entertainment explained that “This Asia Tour shows Kang Daniel’s spectrum that extends to the global stage”. 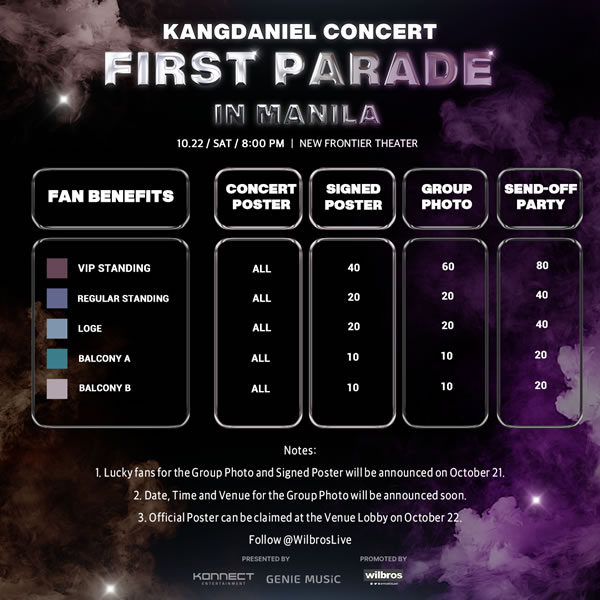